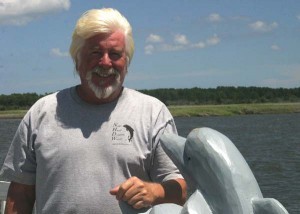 moved to the Outer Banks in 1984 where he and his wife, Wendy, raised their three children. He became a United States Coast Guard Master in 1998 and bought the Nags Head Dolphin Watch in 2008.

Currently, he is on the Board of Directors for the Outer Banks Center for Dolphin Research. Even after more than 30 years of living here, he still marvels at the beauty the Outer Banks has in store. He just can’t wait to show some of it off to you. 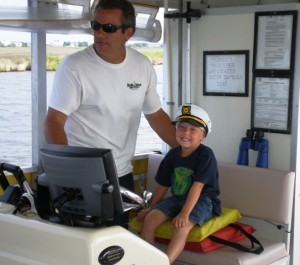 is a United States Coast Guard licensed 100-ton master. He has followed the path of the Bottlenose Dolphin, Manatee, Whales, and other marine wildlife from the east coast to the Gulf of Mexico for the past twenty years.

Carl is looking forward to having you onboard!

is one of the captains of the Safari tour! He is a local legend with over 62 years of experience working on the waters of the Outer Banks. He is an experienced commercial fisherman, an avid outdoorsman, and is passionate about the history and conservation of the area. He is as local as it gets with family tracing back to a shipwreck back in the 1800s and will gladly share stories about life on the island long ago, just ask!”

moved to the Outer Banks in 1994.  He currently holds a USCG 50 ton near coastal masters license with sailing endorsement and a British Virgin Island Boat Masters 2.  He’s an avid fisherman and sailor.  He enjoys every opportunity to cast the lines and embark on a new adventure. fell in love with the Outer Banks at a young age.  His family began vacationing on the beautiful beaches when he was an infant. After moving here in 2008, he spent several years “snowbirding” between the waters of the OBX and the Florida Keys. His love of being outside, along with his fascination for marine life led him to earn his USCG 25-ton masters license, where he currently captain’s for The Nags Head Dolphin Watch. 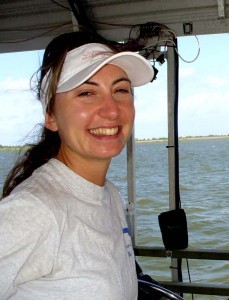 has a Bachelor of Science in Marine Science from Rutgers University and a Masters of Coastal Environmental Management from Duke University. Her Master’s research focused on studying the specialized feeding behaviors of bottlenose dolphins in Sarasota, FL. She has also participated in several field research studies of bottlenose dolphins, humpback whales, Stellar sea lions, and predatory fish in Florida, South Carolina, Australia, Alaska, and New Jersey. Jessica has worked as a naturalist with the Nags Head Dolphin Watch since 2007.

In 2008, she incorporated the Outer Banks Center for Dolphin Research (OBXCDR), a non-profit dedicated to the conservation of bottlenose dolphins in the Outer Banks, and currently serves as President and lead Principal Investigator of the organization. Jessica has 6 years of teaching experience in Dare County Schools; through the OBXCDR, she has presented educational programs related to dolphin conservation to local schools and organizations. While not out on the water, Jessica lives with her husband, Jay, and their two children in Kill Devil Hills. Abby Parker is graduating from Oberlin College, OH in June 2022 with a BA in Biology. She fell in love with all things ocean when she took a summer field course at Shoals Marine Laboratory on Appledore Island, Maine and studied marine mammal biology. Since then, she has developed her marine research experience through an internship with Chincoteague Bay Field Station, where she conducted an independent research project to characterize bottlenose dolphin behavior and contributed to photo-identification surveys. Currently, she is using this research to complete her honors thesis. She has also studied the behavioral ecology of eastern gray squirrels, Florida scrub jays, and eastern mockingbirds as an undergraduate researcher at Oberlin College and proposed a study on bottlenose dolphin bioacoustics at Duke Marine Lab.

Abby is also passionate about environmental education and is excited to share her love and knowledge of dolphins with visitors as part of the Nags Head Dolphin Watch team this summer! Previously, she has taught others about the environment as a program facilitator at Camp Fitch YMCA in North Springfield, PA and connected students with their environment as an intern at Chincoteague Bay Field Station. This summer, she looks forward to growing as both a researcher and educator alongside the rest of the Nags Head Dolphin Watch and Outer Banks Center for Dolphin Research teams! Amy Cabeceiras graduated from the University of Rhode Island in 2019 with a BS in Wildlife and Conservation Biology. She grew up in Rhode Island, the Ocean State, and has loved the ocean almost from birth. During her time at URI, she took several marine biology courses to expand her knowledge of the marine world.  In 2020 she interned with the Sarasota Dolphin Research Program where she surveyed dolphins in their natural habitat, assisted with dolphin necropsies, and participated in photo identification of the local population. Right after she completed her internship she became a licensed Wildlife Rehabilitator and has successfully reared 22 orphaned squirrels in her first two seasons. She is looking forward to her first season in wildlife education and sharing her passion for dolphins with the Nags Head Dolphin Watch and Outer Banks Center for Dolphin Research. John Felter,  as a new permanent resident of the Outer Banks, he is honored to be joining the Outer Banks Center for Dolphin Research and Nags Head Dolphin Watch for the 2022 season.  He is a recent graduate of Shippensburg University in PA, where he earned a BS in Biology with a concentration in Ecology and Environmental Biology.  He is a member of the Phi Theta Kappa National Honors Society and is a recipient of the Edith Nourse Rogers STEM Scholarship.  In the summer of 2021, he attended a course at the Chincoteague Bay Field Station in Wallops Island, VA, conducting research on the local bottlenose dolphin population. He is very passionate about marine life and conservation, especially as it pertains to marine mammals and is excited for the opportunity to continue studying this remarkable species this summer.  He is also an avid fisherman, golfer, a US Army Vet and an Eagle Scout. Rachel Hilt is a master’s student at Duke University studying Coastal Environmental Management. Her master’s research focuses on defining marine mammal stocks and how our understanding of their definition has changed over the years. She has worked extensively with non-profit organizations and federal agencies doing field work. In 2019, she interned with the Blue Ocean Society for Marine Conservation to conduct research on humpback whales in the Gulf of Maine and worked as a naturalist on the Grant State Whale Watch. She also spent last summer on Cape Lookout National Seashore to monitor nesting sea turtles and is excited to be back in the Outer Banks again this summer! In the future, she would like to have a career in marine mammal conservation and is excited to join the OBXCDR and Nags Head Dolphin Watch team to continue following her passion for dolphins and whales.