Take some time to meet the Kitty Hawk Kites Hang Gliding Instructors, check out their certifications and what they are all about. 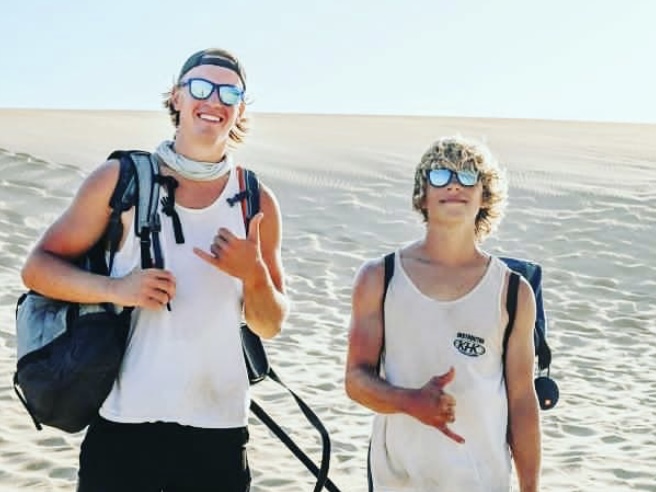 Billy has been a hang–gliding pilot since 1984 and started instructing in 1985. Billy has flown sites all over the United States, Mexico, and Puerto Rico, but some of his favorite and most memorable flights happened right here on the Outer Banks, where he grew up. Billy is a graduate of Appalachian State University with a degree in English, but still found his way back to hang gliding on the Outer Banks. He is an inspiration to the younger generations of instructors and pilots who look up to him as the “The Modern Father of Hang-Gliding”. Megan stumbled into the hang–gliding community while she was delivering cookies one night while in college at Virginia Tech, and the rest is history. She then joined the Hang–Gliding Club while at Virginia Tech, where she eventually worked her way up to being Vice President.  Megan is a 2018 graduate of VT with a degree in Neuroscience and Psychology and after graduating she started working at Kitty Hawk Kites and has worked her way up to being the Flight School Co-Manager. When in doubt, call and ask for Megan! Allison took her first hang–gliding lesson in 2019 and the very next year came back to be an instructor.  She is a graduate of Roanoke College, where she earned degrees in Sport Management and in Health & Exercise Science. During her time there she was also a member of the women’s basketball team.  After graduating in 2020, Allison traded in her basketball gear for hang gliding gear and pursued her new passion. Hang glider pilot since 1975, an instructor since 1977. Jon is a member of the US National Sport Class Hang Gliding Team. Jon has flown over 9,000 safe solo and tandem flights. His mustache can sniff out thermals better than most of the local birds, making for a great tug pilot! Andy is one of our tandem hang-gliding instructors and  he will make sure your experience in the sky is unforgettably exciting. If his long, blonde hair isn’t blowing in your face, you’ll have a great view of the Outer Banks with this awesome tandem pilot! At this point he might as well be a bird, because when he isn’t hang-gliding you can find him somewhere in the sky in either his paraglider, paramotor, or his trike. Come fly with Andy this summer! While straining your neck to greet this towering, friendly fellow, you may be surprised to learn the extensive flight experience behind his young visage.  Mike has been a tandem instructor since 2013 and is also and experienced paraglider and trike pilot. When he’s not flying in the sky, you may see Mike surfing the waves at the beach, or looking for a ride back to his car after a long downwind kiteboarding session.  You won’t forget your aerial tour of the Outer Banks with “Too-Tall”. Nic “The Stallion” Baack is the true definition of a work horse! He is one of the most dedicated and determined hang gliding pilots out there, obtaining his Hang 3 Intermediate rating in just 3 months! He is now entering his 4th summer of teaching out on the dunes, where he is just as dedicated and determined in teaching his students how to fly.  When not flying or teaching, you can find Nic out kiteboarding, rock climbing, or riding around on his long board.  During the winter season, he spends his time hitting the books, studying Business and Entrepreneurship at NC State University.  Come fly with Nic for an energetic and unforgettable flying experience! Charlie’s been working on the sand dunes, all the live long day! He took his first hang–gliding lesson when he was 14 and is now entering his 5th summer as a hang–gliding instructor. During the summer if you don’t see Charlie out flying, he is probably out catching some waves or at the skate park. He has a passion for teaching and in the winter–time Charlie swaps his hang–glider for a snowboard and heads out west to continue teaching the world to fly in other ways. Come have a gnarly time flying with Charlie! Drake has always been fascinated with the wind and the sky.  His first job was in a kite shop, where he became an expert kite flyer, eventually deciding to upgrade his stunt kites to something a little bit bigger and more intense – a hang–glider. Drake started teaching hang gliding in the Fall of 2018 and is now entering his 4th season as an instructor and although he may be our smallest instructor, don’t let his size fool you. He may be small, but he is mighty! Come fly with Drake for a big time! Dalton “Riot” Burkhalter brings an unparalleled energy to the sand dunes of Jockey’s Ridge State Park. After completing two seasons teaching hang-gliding here on the Outer Banks, he has blossomed into a nuclear powerhouse of free flight instruction. When not hang-gliding, Dalton enjoys long walks on the beach, screaming randomly, and cooking his specialty dish: microwavable cheese curds. Hailing from the mountains of western Montana, Noah “The Human Ponderosa Pine” Eikens is a 2nd generation hang-glider pilot whose parents instructed hang-gliding back in the 90s! After graduating from the University of Puget Sound with a degree in microbiology, Noah left the lab and ran off to the sand dunes and has now spent two summers teaching hang-gliding on Jockey’s Ridge. With experience in instructing everything from biology to snowboarding, he brings a polished, scientific approach to the art of teaching the world to fly. Other than the sky, you can find Noah clinging to rock walls or slashing sick pow lines. Coming from a long line of hang glider pilots and instructors before him, Michael was born into the hang-gliding community and was destined to become a pilot and instructor himself. Despite having such strong hang-gliding origins, Michael’s first passion was for snowboarding.  After becoming a snowboarding instructor, he wanted to be able to teach a sport during the summer months when snowboarding wasn’t an option and thus, he came back to his roots – hang-gliding. Since then, he has made the family name proud by instructing students of all ages and experiences! Growing up in Ohio, the “Birthplace of Aviation”, it is only fitting that Mikah became interested in the flying community and came to teach hang gliding on the Outer Banks, where the Wright Brothers first flew.  Mikah is now entering his 3rd season as an instructor and when not running around out on the dunes you may find him surfing, skiing, or going on long runs while barefoot.  Come fly with Mikah and challenge him to a race up the dunes for an unforgettable experience! Growing up in the rainy, Pacific Northwest, Larsen quickly learned how to make those dreary Washington days a little bit brighter. This is a skill he carried across the country with him and continues to implement today! Whether it’s his personality or his colorful and eccentric outfits, Larsen will no doubt brighten your day! Come fly with Larsen and make sure you catch him on Romper Friday’s! Jude “The Dude” Denton is a flying machine! Not only does he fly hang gliders, but he also loves flying through the sky while skydiving, as well as flying down the road in a firetruck when he is volunteering as a firefighter.  Make sure you sing “Hey Jude!” to him when you greet him – he loves when people do that because as his name suggests, he is The Beatles #1 FAN! Come fly with Jude for a one of a kind experience! Born and raised in central Minnesota, Braden (a.k.a. Brad) grew up with a love for the great outdoors. Some of his favorite outdoor hobbies include snowboarding, ziplining, and teaching hang gliding in his khakis. Make sure you wear your khakis when you come fly with Brad for a more classy hang gliding experience!

David hails from Baltimore, MD where he competes as a D1 athlete on the Loyola University Maryland rowing team. David took a tandem hang gliding flight at the Cotton Gin with “Lucky Luke McFly” back in 2020 and the rest is history. When he’s not on the sand dunes hauling gliders, you can find him at the gym or on a long pleasant hike. Come fly with David (he never skips leg day)! This four-legged friend will be the first to greet you at the door of the flight school. Tuck is a friendly little guy that always has a big slobbery smile and a fluffy wagging tail. He is the entertainment of the flight school and is everybody’s best friend. Come say hi to Tuck! From a little pup, Pilot was born and raised in the hang gliding world. As such, she was a natural born pilot, rightfully earning her name as she has been on many flying adventures. She is an adventurous outdoor pup that loves flying, hikes, and swimming in the ocean! Come say hi to Pilot!